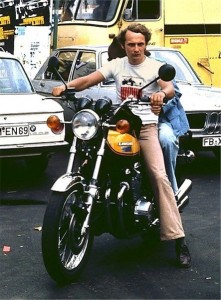 I am a very big fan of Formula 1, actually it’s the only sport which I watch closely, so it’s very exciting news for me, that a big time director Ron Howard started to work with a biography picture of famous three time F1 champion Nicky Lauda and his near death crash in 1976. The movie is financed outside of major studios so hopefully this will give the director more freedom.

Niki Lauda will be portrayed by German actor Daniel Bruhl, who became a local hero after a beautiful melancholic movie Goodbye Lenin and an international star after Tarantino’s Inglorious Basterds. Chris Hemsworth will star as his main rival – British driver James Hunt.

After a very successful last year documentary about a fascinating and tragic career of the most admired F1 driver Senna, it’s about time somebody made a big feature film about this phenomenal sport.