The end of film cameras

Three largest camera manufacturers – ARRI, Panavision and Aaton – decided not to make motion picture film cameras and focus all the attention to digital products. According to the companies, demand of film cameras is virtually dead for last couple of years. ARRI, for example, film cameras was making only on demand since 2009.

One of the biggest draws to digital cameras during the last years was stereoscopic 3D, as it its much easier to synchronize two digital cameras than film. Another so far very early movement is 4K of even 5K resolution digital cameras, which are used, for example, by Peter Jackson for Hobbit. 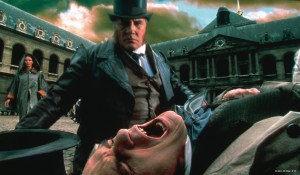 Digital cameras gained their share very fast. Although the talk about digital era started back in the seventies, the first full major movie shot with digital camera was released only in 2001. It was a really interesting time, because the first such movie had to be George Lucas Star Wars Episode I, but for that time Sony couldn’t produce a suitable camera, so the crown went to french film Vidocq. I absolutely adored the picture, watched it many times and the CGI effects were much more seamlessly combined with video footage than in movies shot with film camera. George Lucas managed to get the technologies for the second of new Star Wars saga movie Attack of the Clones, which was released in 2002.

In a year or so about 80 percent of the movies will be shot with digital cameras. Currently there are around 50 percent digitally equipped cinema theaters in US and they be fully digital by 2013.