The guy behind phenomenal Paranormal Activity brings another pseudo documentary horror story, this time in Chernobyl. 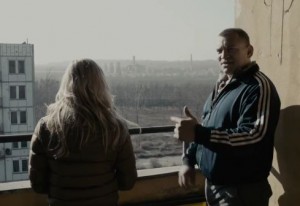 Six young tourists travel illegally to abandoned Chernobyl workers city Pripyat with a local tour guide. Of course something will go wrong in the style of former writer‘s Oren Peli developed movie. Looks much more interesting than sequels of Paranormal Activity. Might even be the first worthwhile movie involving the catastrophe. The cool thing is that such illegal tours are actually happening and it‘s quite a big business for locals.

The movie is directed by newcomer Bradley Parker who earlier worked as an assistant for Let Me In and with visual effects for such movies as Fight Club and Donnie Darko.

Chernobyl Diaries premieres on May 24.