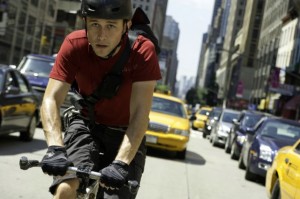 The premise is quite simple:  Lewitt’s character, a bike delivery guy, gets some special package, which attracts a dirty cop‘s attention. Although not a novelty in general, I don‘t think we have seen such big studio explosive chase movies with cyclists. The director is a bit new for such type of film – his previous work was quite fun smart comedy with Ricky Gervais Ghost Town. Might be interesting though.

Premium Rush premieres in the end of August.