New potential masterpiece from There Will Be Blood director with Philip Seymour Hoffman and finally returning Joaquin Phoenix. 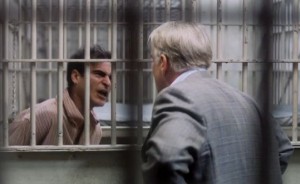 Paul Thomas Anderson as always picked a very interesting, intriguing and probably dark and complicated story. And perfect actors for that. After his faked departure from movies and self mockumentary about becoming a rapper, Joaquin Phoenix returns to the big screen and from the first glimpses it‘s obvious he is really into it. He plays a guy, who after returning from World War II doesn‘t remember something and is drawn into relationship with a mystical powerful man – The Master, played by Philip S. Hoffman – and his faith based organization.

The movie premieres in autumn and definitely will be one of the favorites for awards season.