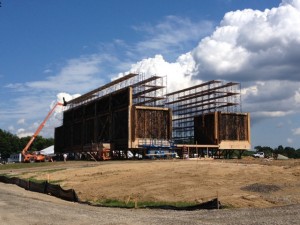 There were many talks about Darren Aronofsky’s involvement in various projects from Robocop reboot to The Wolverine, but eventually he quit everything and put all effort into Noah – epic biblical film, which is based on his and long time collaborator Ari Handel‘s graphic novel. Projected budget – 130 million.

The first set picture is a proof that Aronofsky is again going for real production and probably will try to use as little CGI work as possible, as it was in The Fountain. The titular role is given to Russell Crowe, also we’ll see Emma Watson, Jennifer Connely, Saoirse Ronan and Anthony Hopkins. The movie is expected in 2014 March.