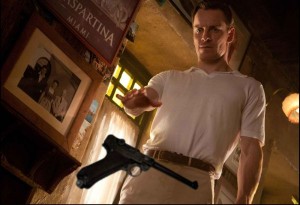 It will be a major debut for Fassbender‘s production studio, he will closely work together with game creators and publishers Ubisoft, who after negotiations with Sony decided to stay independent to have greater control and formed their own movie division Ubisoft Motion Pictures. Sony might yet sign as a distributor.

Ubisoft already has a most successful game adaptation to the big screen. Prince of Persia grossed 335 million and took away the title from long time holder Lara Croft: Tomb Rider. But as the movie cost 200 million to make and did not do so well in the US, it was considered a commercial failure. So approach to Assassin‘s Creed will be much more careful and the costs will be lowered by using many Ubisoft game studios resources.

Assassin‘s Creed as a game series was actually born from Prince of Persia. Developers wanted to do a new version, but in the process drifted to totally new concept. The hero is taken by the mysterious modern Templars agents and using a special machine lives through his ancestors’ – Middle Ages and Renaissance assassins – memories and has to find the artifacts, which will give Templars control over all mankind. So far the series sold 30 million copies.